Ever larger and more powerful wind turbine models, ever lower electricity production costs, ever greater demand for renewable energies and a never greater social and political will to abandon fossil energy sources - the basic conditions for German wind energy are promising. In addition, wind is the most important source of renewable energy in the German electricity mix, and the trend is on the rise.

In order to keep the conditions promising, the general public's acceptance of wind energy must be upheld. A suitable instrument for this can be the opportunity for private individuals to participate in wind energy projects in a direct, uncomplicated, flexible and transparent way, even with low sums. The range of investment opportunities spans from bonds and shares to direct investments, profit participation rights or subordinated loans. However, practically none of them can combine all the aforementioned attributes at the same time.

Closed-end funds or direct participations may offer a direct co-ownership including profit sharing. But this is at the sacrifice of flexibility, as the term of such investments is at least ten years. Also, the entry hurdle for small investors is also quite high, as a rather high investment sum is necessary.

The purchase of wind energy equity funds as well as shares in individual wind energy companies is more flexible and possible with considerably less capital investment. Those who invest in shares of Vestas, Nordex & Co ideally benefit from positive price developments or dividends and also invest directly in the business models as well as in the current and future projects of the companies, but not in a specific wind project.

A new way of investing in wind energy: tokenization of assets

Just as wind turbines are evolving technologically, new digital technologies are bringing a new breeze to the investment market and opening up entirely new investment opportunities. We take a closer look at one of them here: tokenization. It has the potential to fundamentally change the entire financial industry and capital markets. It enables real assets to be digitally partitioned and represented in many small units which can then be traded via the blockchain.

What is a token?

A token is a digitized representation or transfer of an asset to the blockchain. In the tokenization of assets, for example physical or digital art objects, classic or luxury cars, real estate or other tangible assets, several tokens are created from these, which can have a certain value. Likewise, a digital securitization process takes place during tokenization which regulates the ownership of assets or rights, like the ownership of a share. 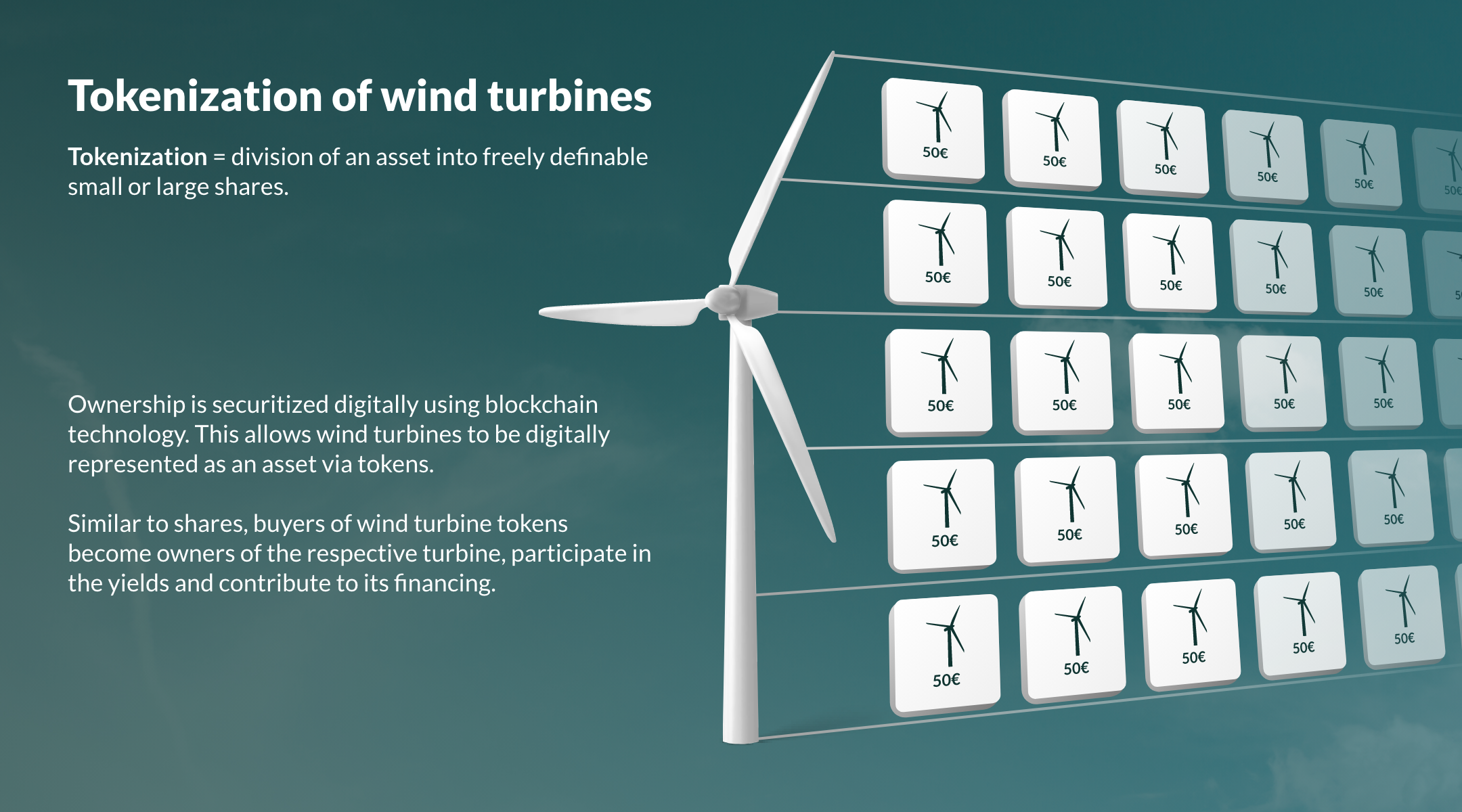 Similar to stocks, wind turbines can be tokenized into many small pieces at a specific nominal value © wind-turbine.com

Why should assets be tokenized at all?

In theory, all assets that can be traded could also be tokenized. However, many assets are usually illiquid and mostly hardly or not at all movable, especially real estate or - to stay with the topic - wind turbines. Another factor is high prices, which is why they are only available to a limited number of potential investors. This can change with tokenization. The digital denomination into freely definable small fractions lowers the hurdle for an entry into a planned or already running wind energy project. Even investors with a small budget can thus become co-owners of wind turbines, contribute to their financing, and participate in their returns.

Tokenization is currently gaining huge momentum in the real estate and art markets, as well as in the area of luxury items. In terms of solar energy, too, the first energy providers have already tokenized their solar plants. When it comes to wind turbines, there's already a platform that aims to bring together wind turbine operators with citizens and companies as investors. One of its initiators is Professor Carsten Hahn from the University in Karlsruhe, where, among other things, he is intensively involved in the research and development of platform economics and platform business models. 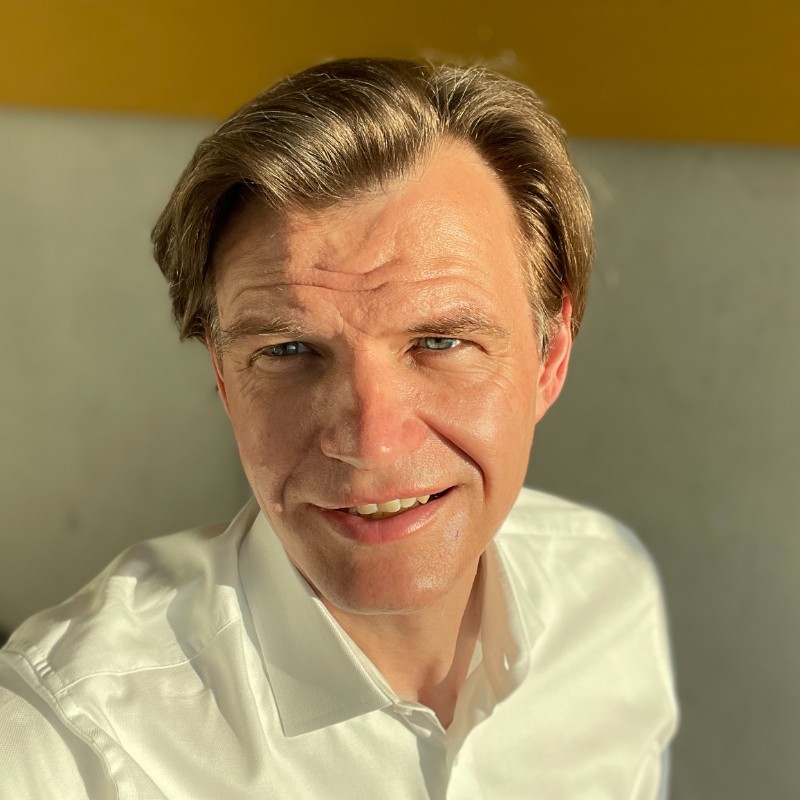 Professor Hahn, the tokenization of wind turbines: Is this the future?

„The financing form of tokenization is still quite a new discipline. The advantage is that it can still be shaped and doesn't have to follow rigid structures and rules. And I am not talking about government regulations. These are already largely defined by the EU. In many forms of financing, it's the banking system that has become an innovation-hostile construct clinging to old rules. “

What are the major advantages of tokenizing wind turbines over other types of investments?

„First, you can specify granularity through the number of tokens per asset. Second, tokens can't be manipulated through blockchain technology. Third, no banks and their overhead or additional costs are needed for the sale or acquisition of tokens.“

Are there currently hurdles in Germany or elsewhere that make the tokenization of wind turbines difficult?

„The tokenization of plants is still at a very early stage both in Germany and in the EU. However, there are already initial projects. For example, the Austrian energy provider ‘Wien Energie’ has tokenized its solar plants, so it’s basically possible in the EU. A big challenge is the awareness and acceptance both among owners of the wind turbines and potential investors. A lot of work and creation of trust still needs to be done.“

How can I participate as an investor owning wind turbine tokens?

„Every wind turbine owner profits from electricity production and sales. If he has tokenized his wind turbine, all token holders profit from the sale of electricity in proportion to their purchased tokens and the total tokens. Electricity production can also be tokenized. This is then a production token representing the energy produced. It would also be possible to combine both tokens, for example to transform the production token into an asset token, like the return on an investment fund, which you can also transform into more fund shares. Basically a two-circle system of tokens.“ 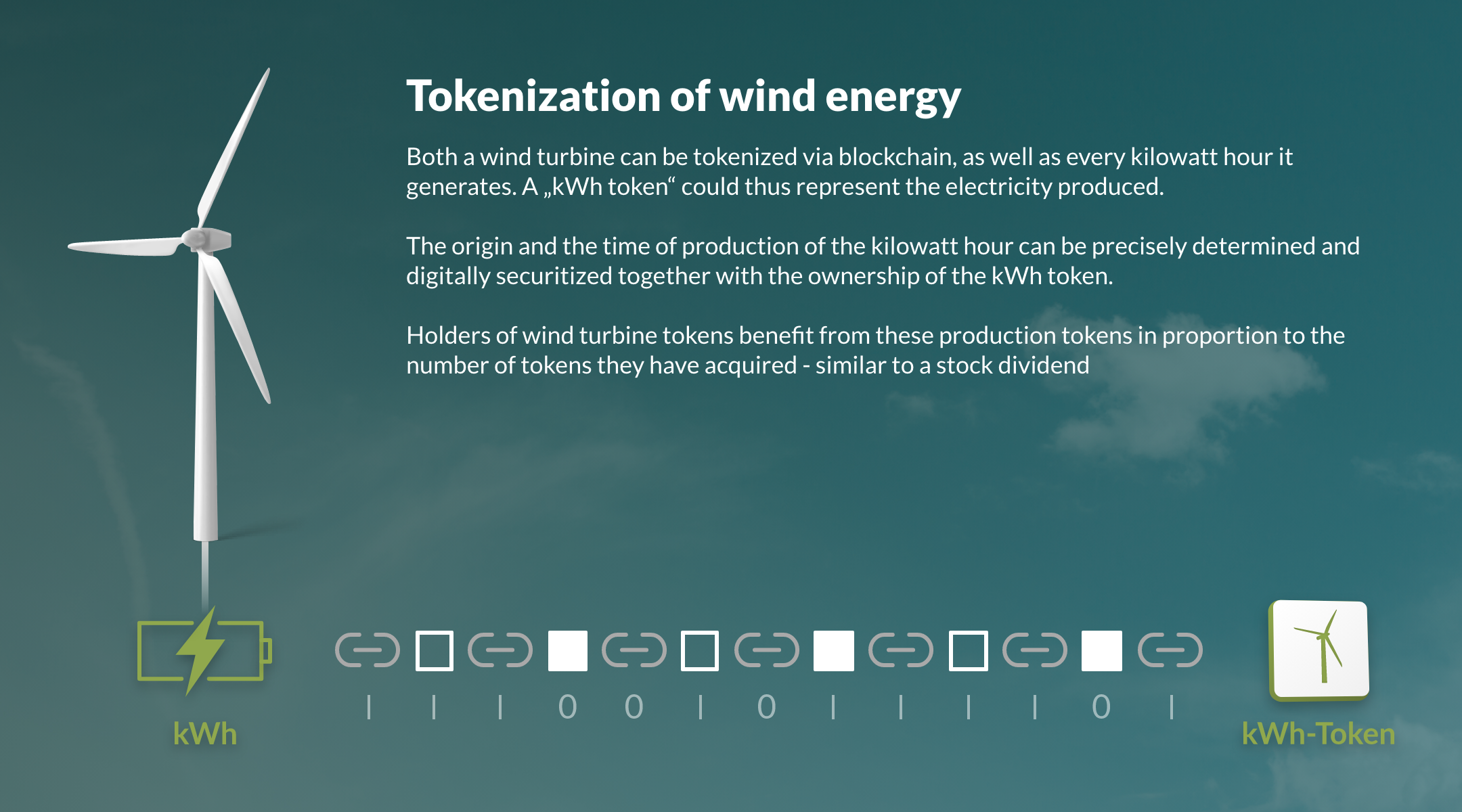 One idea ahead: The energy produced by wind turbines can also be tokenized © wind-turbine.com

How can one imagine the pricing of tokens?

„There are several influencing factors. First, the demand. If the wind turbine is an attractive asset, the price will rise. Second, the supply. If there are many comparable wind turbines, the price will fall. Third, the expected lifetime of the turbine. Over time, the price will decline, similar to a time bond because of the finite expected returns from electricity production. Fourth, the condition of the plant. If it’s well maintained and the condition is good to very good, the price of the token will also increase. Fifth, the energy market price. If there’s an oversupply of renewable energy, the price of the plant's token will fall.

What does it take for a successful tokenization project?

„The wind turbine owner must be willing to tokenize his turbine. Then he must decide how many tokens should represent the turbine and must determine how many of the generated tokens he wants to sell. Not to forget that also investors must be found. That's why the entire process should be moderated and carried out by a tokenization platform, because the individual wind turbine owner would be overwhelmed by it. “

Promising prospects, but still much to be done

Tokenization brings many advantages for investors like no other in the wind energy sector. An asset that is inherently rigid and otherwise available to a narrow audience is now becoming liquid and thus worldwide accessible to investors with smaller budgets. They become co-owners of wind turbines and benefit directly from their returns. But tokenization is also a new way for wind turbine operators, municipalities or other stakeholders to collect investor capital and gain access to liquidity without having to go through many detours. This lowers the barriers to entry into wind projects for both investors and issuers.

But: tokenization of wind turbines is still in its infancy and must prove its advantages in practice. Likewise, there is still a lot of work to be done to dispel the reservations and concerns of more conservative and digitally less affine investors until a sentence like "A piece of wind turbine for €50.00, please!" becomes the norm. If tokenization has what it takes to make the financing of wind projects faster and more flexible and to realize the construction of wind farms that otherwise would not have come about, then it brings the great chance to push the worldwide energy transition, to bring new ways of industrial participation and the move toward to get a step further to climate neutrality.