The future of seafloor data surveying

Germany’s so-called ‘Easter Package’ has made acquiring new permits for offshore wind developments faster and reduces delays from legal challenges, so new capacity will become easier to establish. The Package included an increase in offshore wind production by 30 GW by 2030. Already, Germany’s offshore wind targets were increased last year to 20 GW by 2030, so the new targets represent an incredibly significant increase, just as the dust settles on the last one.

The signs point to offshore – not just in Germany

Barring any further target increases, circa 10,909 new wind turbines are set to be installed offshore Germany by 2030 to deliver the desired 30 GW boost. 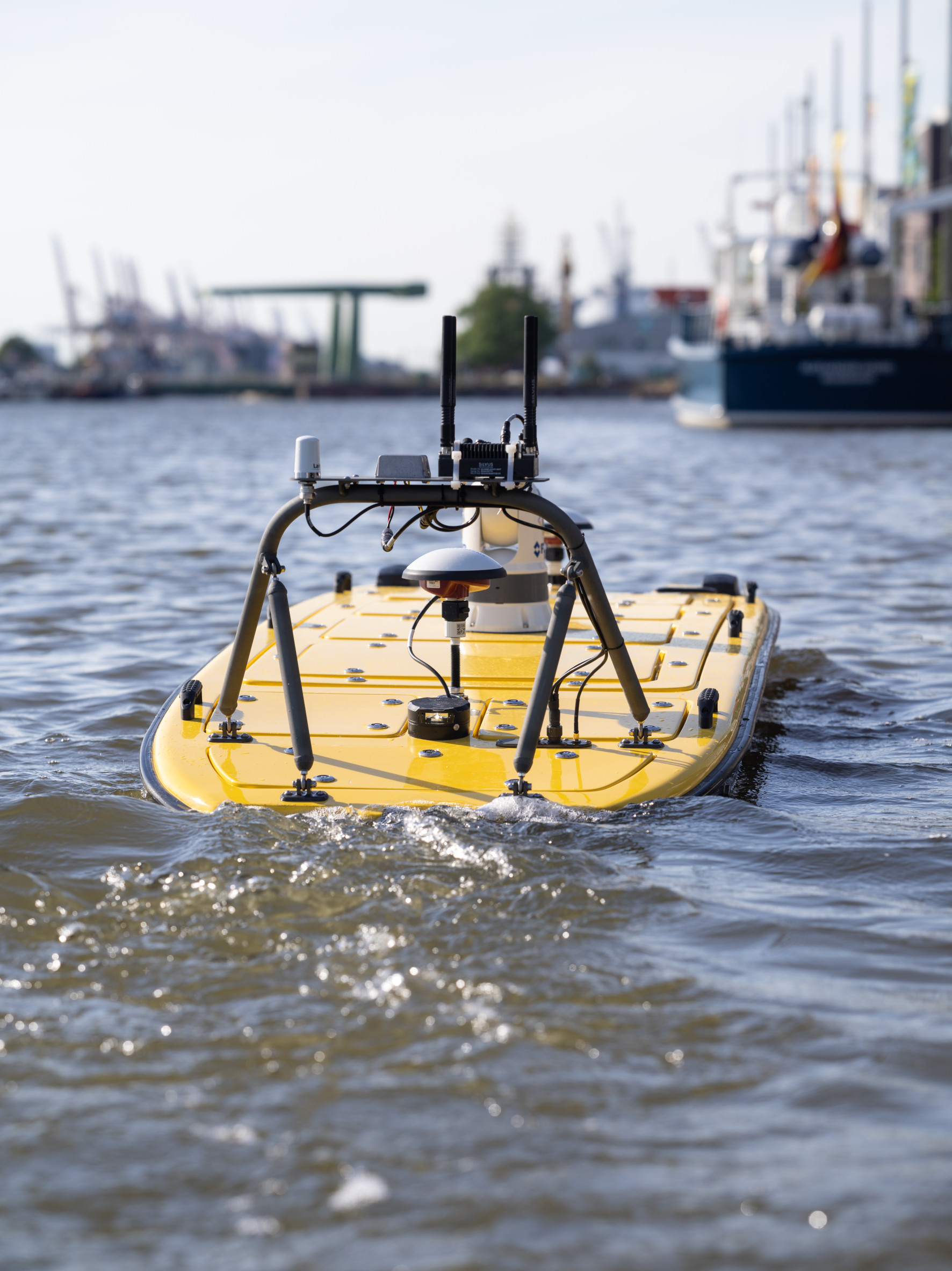 The vast number of new turbines needed also shines the spotlight on German industry and innovation in diverse sectors. This includes marine survey, a commercial service that planners, engineers, prime contractors, and operating companies depend upon for accurate underwater data that is necessary for safety, efficiency, and cost reduction at every stage of an offshore wind farm’s lifecycle.

… and this increases the demand for offshore data analysis Hydrographic survey contractors acquire high resolution data to build a detailed bathymetric (seafloor) map of a proposed wind farm site to standards set by the International Hydrography Office (IHO). Surveys will also be conducted prior to, during and after the installation of pilings and turbines, for cable routing and for unexploded ordnance (UXO) searches. Once the wind farm is operational, data will be required periodically over the 20–30-year lifecycle for use in e.g., condition-based maintenance systems.

As with all aspects of wind farm operations & maintenance, the cost of bathymetric data is a constant pressure. The marine survey industry must continue to optimize and innovate to accommodate the growth in offshore wind and the data it requires. Autonomous and Unmanned Surface Vehicles (USV) will play a key role.

Manned survey vessels can cost anywhere from a few thousand Euros to 150K per day, with a tangible portion of these costs going towards the human element; think cooks, living quarters, training, wages and benefits, welfare and safety, telemedicine and even Netflix. But with vessels designed to never have a human on board, both CAPEX and OPEX can be radically reduced. 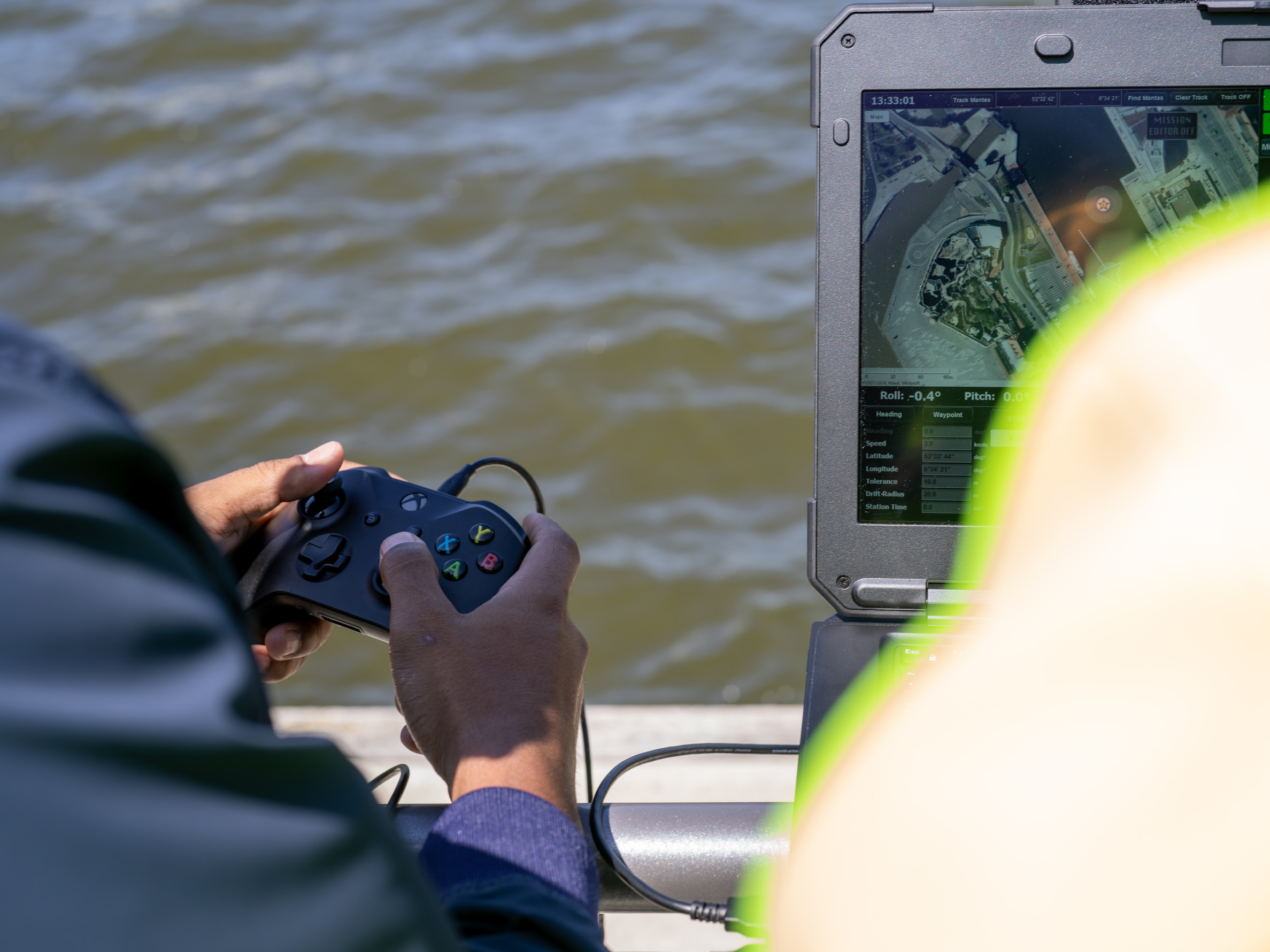 Achieving a reduction in the cost of marine data by using USVs requires several pre-requisites in both technology and strategy, however. The first is vessel design. Today’s commercial survey USVs are based on the workflows and physical design of traditional survey vessels. They can operate without a human on board but are restricted by operational norms in that they are slow and not highly manoeuvrable.

The most effective approach is to deploy smaller, faster, and more agile unmanned platforms. The rationale being that a nimble USV can adapt to operational demands quickly, using all-electric propulsion for clean and lower cost running, while navigating autonomously in both transit and during surveys is a positive step towards ‘de-manning’ survey operations.

To truly remove the human-from-the-loop, the hydroacoustic package – the system that collects the data – must also feature AI powered autonomous operations that can inform the USVs own autonomy controller of actions to take based on its own real-time results. 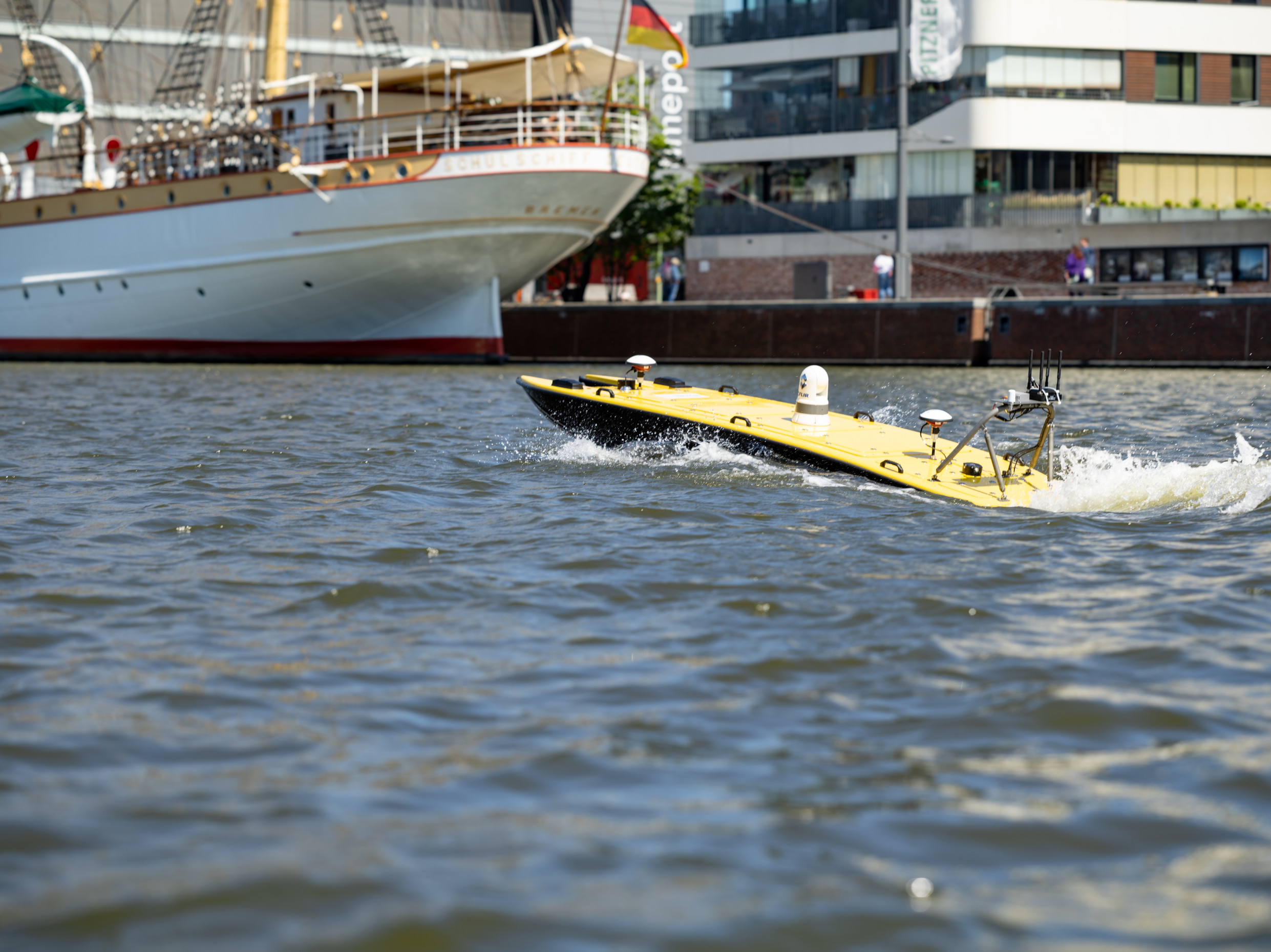 USVs with the required autonomous capabilities are in place and more intelligent survey systems are just around the corner. Once a new generation of multibeam systems arrives, a further advantage of the next generation USV approach is that they will be able to boost the speed at which a survey is conducted.

Today’s average survey speed is around 4-6 knots (circa 10 km/h) due to the limitations of multibeam echosounders and associated technologies, but new hydroacoustic systems able to produce as high-quality data survey speeds exceeding 16 knots (Circa 30 km/h) should be available within 2022. This means a fast USV capable of hitting the survey system’s speed limit can survey three times more area than a slower manned or unmanned vessel uncapable of maximising the systems full capabilities.

When the above technology prerequisites are met, new workflows can be introduced. Fully autonomous operation will see USVs operating on their own for an entire day, returning to base to transfer data (or uploading the data via satellite immediately), and then going back out again on swapped-out or recharged batteries – all while collecting commercial quality bathymetric data, on spec. An entire fleet could operate 24 hours a day to build an extensive data library ready for immediate application to any engineering projects on demand.

Another scenario is the use of Vessels of Opportunity or ‘Mother Ships’. A wind farm service vessel moving engineers between turbines day in, and day out, could for instance, be the permanent home for several small and agile USVs. The vessel would only need a small deck crane as a launch and recovery system and no real expertise on board, other than training for safe deployment and retrieval. 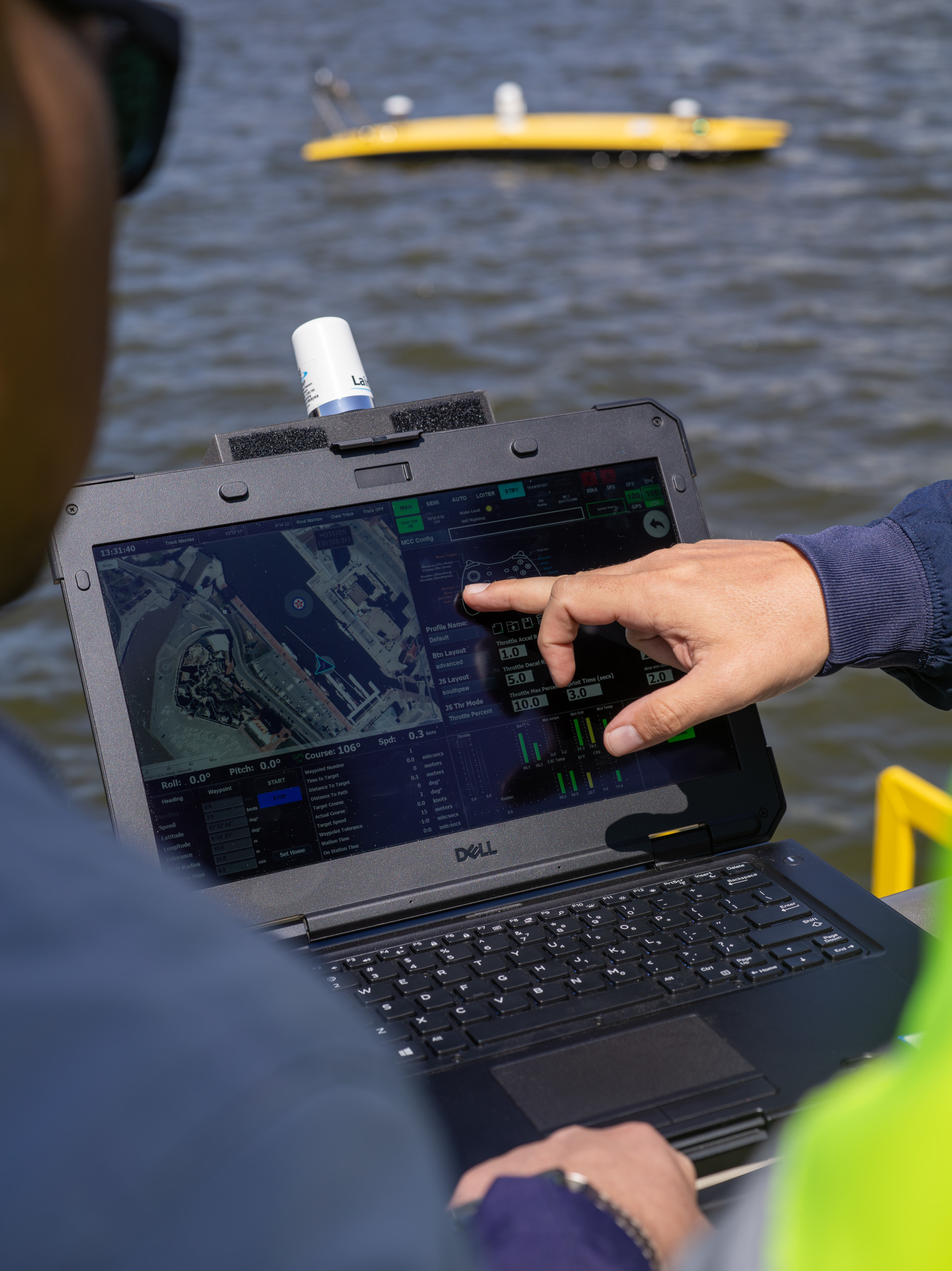 On screen the user can see details of the USV and navigate the boat. © Subsea Europe Services GmbH, Photographer: Swen Bachmann

Further, it has already been demonstrated that operating such next generation USVs in swarms can increase savings exponentially. Multiple interconnected USVs can independently go about their business of sucking up enormous amounts of bathymetric data with minimal human intervention and oversight, essentially commoditizing marine data for the end-user.

The future of hydrographic data acquisition could be revolutionized with USV. AI powered USVs working alone with AI powered hydrographic sensors, producing ready to use bathymetry data could cost a fraction of what conventional processes cost. In an ideal world where marginal costs are optimised and infrastructures, hardware and software are 100 percent robust and failsafe, we can predict that a day’s worth of survey data today costing 12k Euro to deliver via a medium sized survey vessel with full complement of crew and surveyors, to be accessible to end-users for as little as one Euro in the future.

This is the singularity. With USV data acquisition at such a low cost, surveys can be done without a commission, and this allows the industry to flip from being a reactive service only, to also offering Data-as-a-Service. So, when any offshore wind stakeholder needs bathymetric data for new or existing projects, it will be available online and at an unthinkably lower cost than today. All in all this would be a big support for the future offshore wind industry and the energy transition worldwide.