The new German federal government – a coalition of Social Democrats (SPD), Liberals (FDP), and Greens (Bündnis 90/Die Grünen), which has been in office since 2021 – is ushering in a new era for climate protection. In its coalition agreement it has prioritised the transformation of the German economy towards climate neutrality. The coal era is rapidly approaching its end in this current decade and renewable energies will finally be playing the lead role in terms of energy supply. Something that used to be taken for granted for fossil fuels, i.e., that they serve the public interest and ensure public security, is set to become enshrined in law for renewable energies. This is an important step for renewable energies in Germany and could simplify several issues.

So, the mood in the German wind energy sector is cautiously optimistic. In his inaugural statement on 11 January 2022 for the expanded Federal Ministry for Economic Affairs and Climate Action (BMWK), which is led by the Greens, Minister Robert Habeck presented some ambitious figures that left many rubbing their eyes in wonder: a gross expansion of onshore wind power of just under 70 gigawatts (see graphic) by 2030. That means more than doubling the existing capacity in just eight years.

Five gigawatts of new capacity are to be added as early as next year, followed by significant increases to ten gigawatts per year in 2027 and the following two years. The ministry has finally accepted the fact that the electricity sector will also have to cope with an increasing demand from the heating and transport sectors (e-cars, heat pumps) in future and will have to meet a gross electricity demand of 680 to 750 TWh per year by 2030 (coalition agreement; for comparison, BEE scenario: 745 TWh). New ambitious targets and first plans for their implementation. 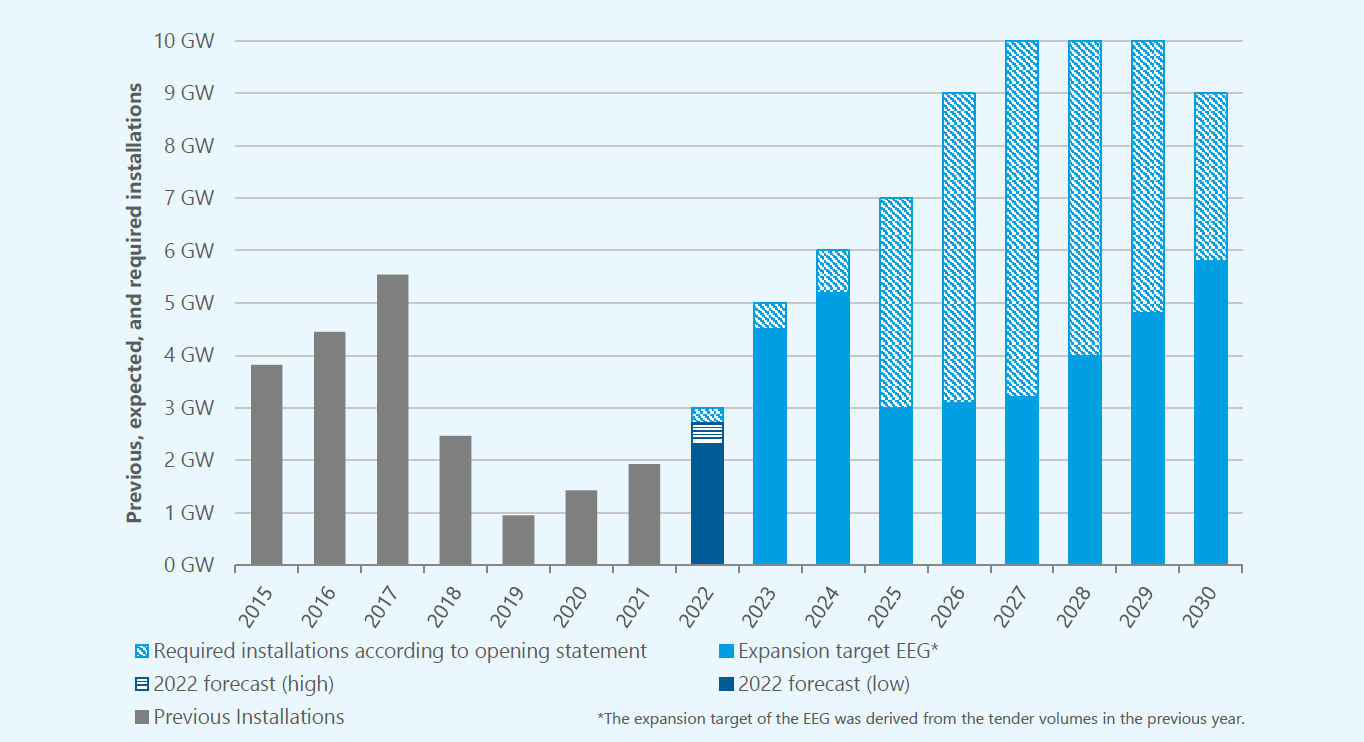 The wind energy sector is prepared: it is now up to politicians to create opportunities

Yet, many of the obstacles and blockades of the past years will have to be removed before manufacturers expand their factories and planning offices go into overdrive. The coalition agreement of the German "traffic light" government states that: "our common mission is to dramatically accelerate the expansion of renewables and to remove all hurdles and obstacles". One important instrument designed to loosen the shackles on renewables involves prioritising wind energy in the balancing of legally protected interests. In terms of monument protection, for example, this would mean that decisions would have to be taken that are more strongly in favour of wind energy at both the planning and approval levels. It could also ease the burden in terms of species protection. This would not mean that species protection is no longer an important issue, on the contrary: more attention may be paid to what the real threats to biodiversity are. It may even put an end to the persistent misinformation about wind turbines being detrimental to species conservation.

"Our goal is to increase the share of renewable energies in the electricity mix to 80 % by 2030 to combat climate change. Wind power has a central role to play in this and we are faced with the task of ramping up its expansion on a massive scale.
We want to increase onshore wind power generation from just under 60 GW today to 110 GW by 2030. The goal is to make 2 % of the national territory available for the use of wind power production facilities and I am currently holding talks with the federal states about this. I am in discussion with the Federal Minister for Transport to find out how we could erect more wind turbines in the vicinity of radio navigation facilities and am communicating with the Minister for the Environment about how to better reconcile the expansion of wind farms with wildlife protection measures.
My office is working at full speed on the implementation of the legislative measures agreed upon in the coalition agreement. I can assure you that I will be doing everything I can to eliminate hurdles and obstacles to the expansion of wind power."

Most recently, the results of the EU "LIFE EUROKITE" research project, which were presented in February 2022, proved that wind turbines and birds are not in competition with each other. The study concluded that birds "supposedly threatened by wind turbines", such as the red kite – a species often cited as a reason for lawsuits against the construction of wind turbines in Germany – are not in fact being endangered by wind turbines. Rather, their populations have been increasing in recent years. 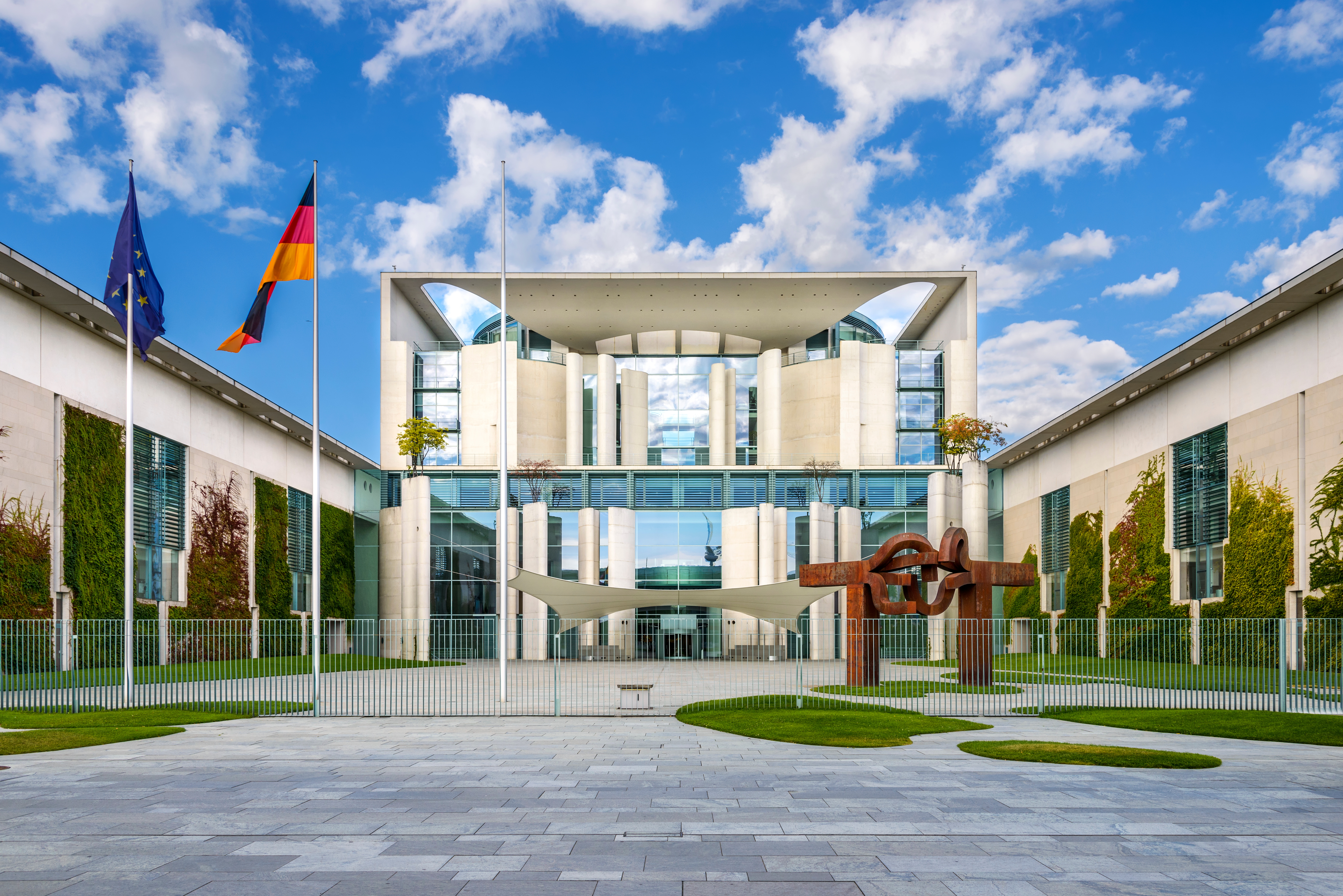 Far-reaching legislative packages planned for the expansion of wind power

Two legislative packages will lay the foundations for the future expansion of wind power before the end of the year: the so-called "Easter package", which mainly comprises an amendment to the Renewable Energy Sources Act (EEG), is expected to be passed by cabinet before Easter and to be concluded by the summer break. The German Wind Energy Association (BWE) has already prepared specific proposals for the Renewable Energy Sources Act (EEG), in which the BWE is calling for an adjustment to the tender volume, the abolition of endogenous quantity controls, and more tender rounds per year. New EU legislation has paved the way for non-tender projects of up to 18 megawatts, which is designed to benefit citizen energy and with this local acceptance. The BWE is proposing a specific definition for citizen energy because the issue is a sensitive one. It is essential to prevent the use of trickery to obtain the benefits. Citizen energy really has to be anchored in local communities. 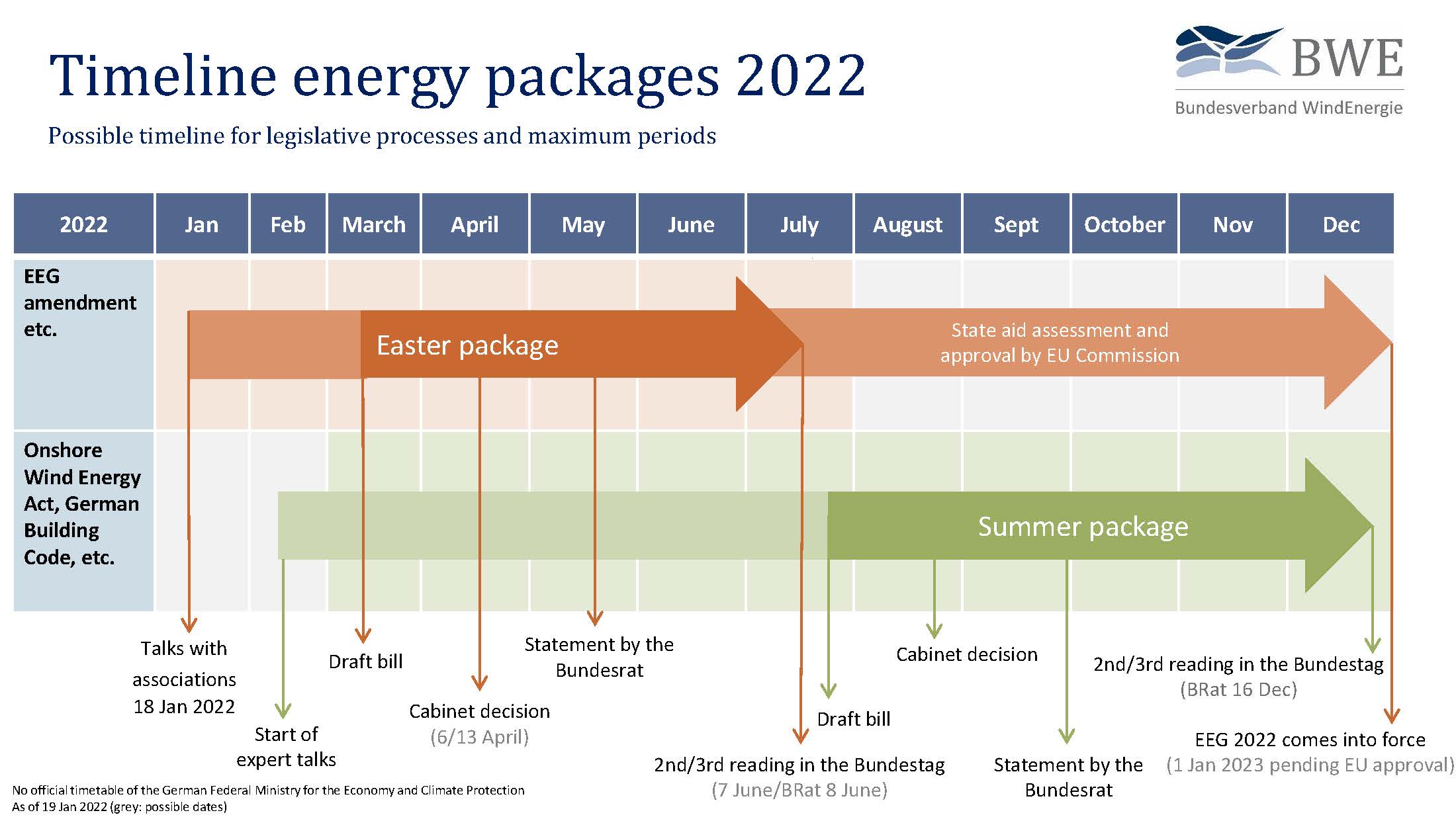 A so-called summer package is also already in preparation which will be discussed in the summer and passed by the end of the year. It will include significantly more important measures for the wind energy sector in terms of planning, approval, and wildlife protection, the latter of which will require close coordination with the German Federal Ministry for the Environment, Nature Conservation, Nuclear Safety and Consumer Protection, which is also led by the Green Party.

It remains to be seen precisely which laws (apart from the EEG) will be reformed as a result of these legislative packages. Explicit mention is made of a new "onshore wind energy act", the aim of which is to reserve two per cent of the national territory for wind energy, to facilitate more rapid planning and approval processes, and to regulate the management of species conservation. Presumably, this would bundle regulations set out in the German Building Code (surface areas and distances), the German Federal Immission Control Act (permits), and the German Federal Nature Conservation Act (species conservation). Even more emphasis must be placed on repowering as an opportunity to boost wind power at accepted locations and to develop additional capacities. Repowering in particular holds tremendous potential for increasing wind energy capacity.

Greater collaboration between the BWE and the government

A new culture of dialogue has also begun, which the BWE very much welcomes. The BMWK already held initial talks with the renewable energy associations back in January. This will be followed by workshops on specific topics in advance of the legislative initiatives. Implementation proposals have been and are still being drawn up within the BWE in collaboration with the committees on the basis of the action plan for the 20th legislative period, with a view to submitting detailed recommendations – often including specific legal formulations – to the federal government. Because of the pandemic, which has led to all meetings being held digitally anyway, it is now possible or even necessary to continuously switch from one video conference to the next covering everything from biodiversity protection to the allocation of land, to the use of airspace by the German Armed Forces and back again. This too is expediting the process and ensuring the greatest possible integration between legislative projects and practice.

The promised transformation to 100 per cent renewable energies can only be achieved if parts of society do not lose out. On the one hand, it is important for the federal government, the states, and local authorities to view this project as a joint effort in which they should collaborate in the best possible way. On the other, this restructuring process will involve society as a whole and will require a responsible approach as well as careful and sound communication. As a strong association, the BWE will help to ensure the success of this task in Germany.

So, people are rolling their sleeves up everywhere.

The wind energy sector has an even greater obligation than before to deliver on its promises and meet people's expectations. Not only does the BWE regularly engage in collaborative discussions with the responsible ministries about the necessary conditions for this, but it also maintains a dialogue with the Bundestag. Rapid successes are needed, because all federal governments will be confronted with an assessment of their efforts in an election year at the latest. There is still a long way to go before we will be able to say "mission accomplished", but the initial steps have already been taken and the BWE will continue its efforts to advance the expansion of wind power and renewable energies in Germany.